What is Modbus TCP?

Modbus is a data communication protocol first published in 1979 for use with programmable logic controllers (PLCs). Modbus popularity is driven by being openly published and royalty free. Originally used in industrial applications using serial line communication, Modbus has expanded to be used with Ethernet or the Internet protocol suite as a transport layer and is now a commonly available means of connecting industrial electronic devices.  It is relatively easy to deploy and maintain compared to other standards while placing few restrictions, other than the datagram size, on the format of the data to be transmitted. Modbus TCP supports communication to and from multiple devices connected to the Ethernet network.

Modbus is often used to connect a plant/system Supervisory Control and Data Acquisition (SCADA) system with factory electronic devices.  In Modbus, many of the data type names are derived from industrial control of factory devices.  For example, a single output is called a coil (1 bit) and a single input is called a discrete input (1 bit).  Other types include the input register (input data) and holding register (output data), both 16 bits.  There are no 32-bit types; 32 bit floating and long integer data types can be handled by using 2 input registers or 2 holding registers.

In Modbus TCP, the server address and CRC error check are replaced with a Modbus Application Protocol (MBAP) header.  The 7-byte MBAP header consists of a Transaction Identifier, Protocol Identifier, Length, and a Unit Identifier, shown in the table below.

The client that initiates a Modbus transaction builds the Modbus TCP ADU.  The function code indicates to the server which type of action is to be performed. Examples of common function codes are shown below.  Refer to each device for specific function codes or refer to Modbus.org for more details.

The Modbus memory locations of a device are organized around the 4 basic data types.  These are shown below.

Below is an example of a Modbus TCP request for the content of an analog output holding registers #40108 to #40110 from the server device with address 15.

Combining industrial real-time Linux servers with Modbus TCP brings the power and flexibility of Linux real-time servers to the world of industrial automation, motion control, and data acquisition systems. A list of Modbus devices can be found in the Modbus Device Directory at https://modbus.org/devices.php. 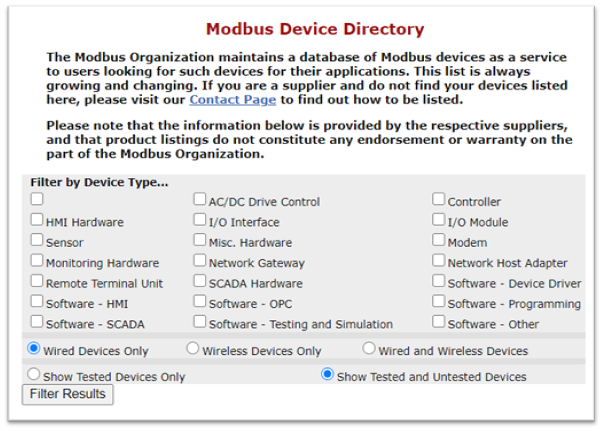 In the ADEPT Framework, setting up a Modbus Client can be accomplished in just a few steps using the ADEPT Development Environment (ADEPT-DE).

Step 1: Create a framework, Modbus_TCP_Example, then add a project, Temp_Monitor, to the framework. 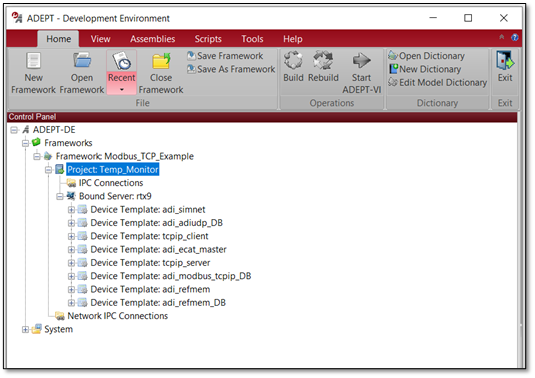 Create a Framework and Add a Project

Step 2: Add a Model Assembly. Model assemblies are containers for models. In ADEPT, model assemblies can contain C code (as in this example named Modbus_TCP_Client), Simulink, ADSIM, C++, or an FMI/FMU model.

Step 3: Drag the adi_modbus_tcpip_DB device template, from the Bound Server, rtx9, and drop it into the Logical Devices for the autogen Model Assembly.   Connect the ports in the logical devices to the corresponding model ports. The device status port returns a value corresponding to the status of the communication.  For example, a value of 0, indicates no TCP connection has been made.  The enable_recovery port, if set to 1, initiates recovery of the TCP connection.  More details on these ports can be found in the Modbus TCP section of the ADEPT Help. 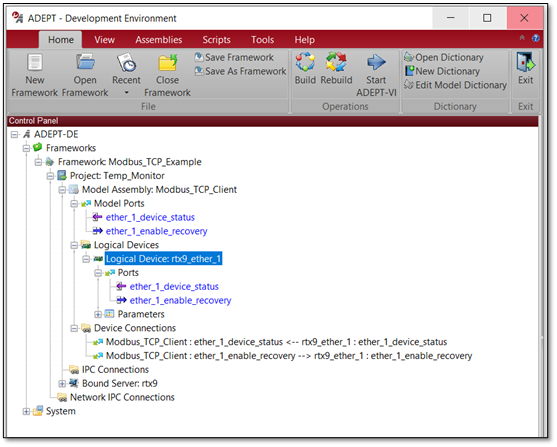 Add the Modbus logical Device to the Model Assembly 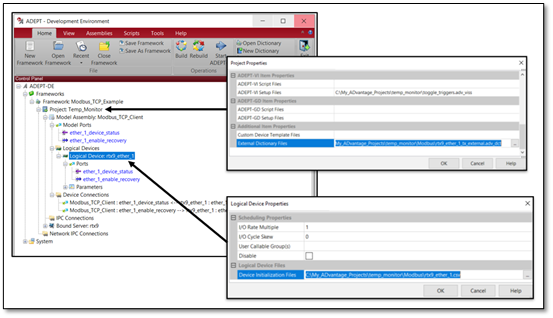 Dictionary and CSV files in DE

The CSV and dictionary files are created using ADEPT-DB. ADEPT-DB is a tool to create and manage message definitions for networked systems of various protocols. For this example, the server is a Nano temperature sensor. 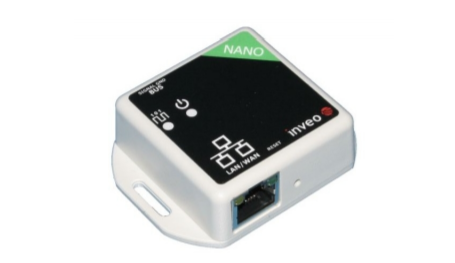 Since this is a request for 16 bits (2 bytes) the function code is 03 – Read Holding Register.  These are shown in lines 1 and 2 below. The response from the temperature monitor will also be function code 03 messages, show in line 3 and 4 below.

Once the messages are defined in ADEPT-DB, the CSV and dictionary files used by ADEPT are generated. The framework project in ADEPT-DE can be built and then run in ADEPT-VI. 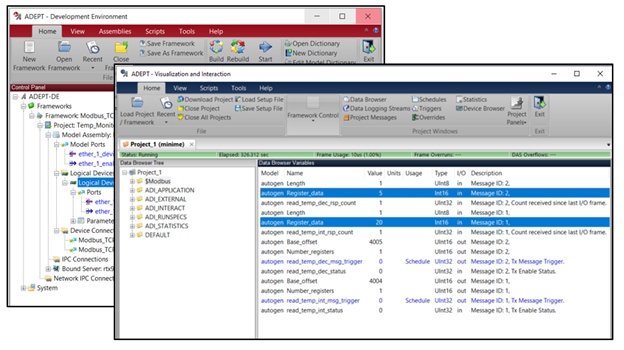 Build and Run in ADEPT-VI

Using the ADEPT Framework, industrial Linux Server, and Modbus TCP offers an easy environment to create a Modbus client or server for your industrial control project.