The server configuration file contains the defining information of the industrial real-time Linux server.  This configuration file contains information that defines the server hardware (what I/O is installed, its physical position and memory allocation, number of CPU cores, etc) and software (server operating system, architecture, and ADEPT version compatibility).  This information is all contained in a concise, open XML format: the Server.adv_sc file.  The server configuration file is then utilized by the ADEPT development environment to compile and build the computing and data handling project, ultimately allowing the project to transmit and receive data to and from the I/O contained within the industrial real-time Linux server at runtime. 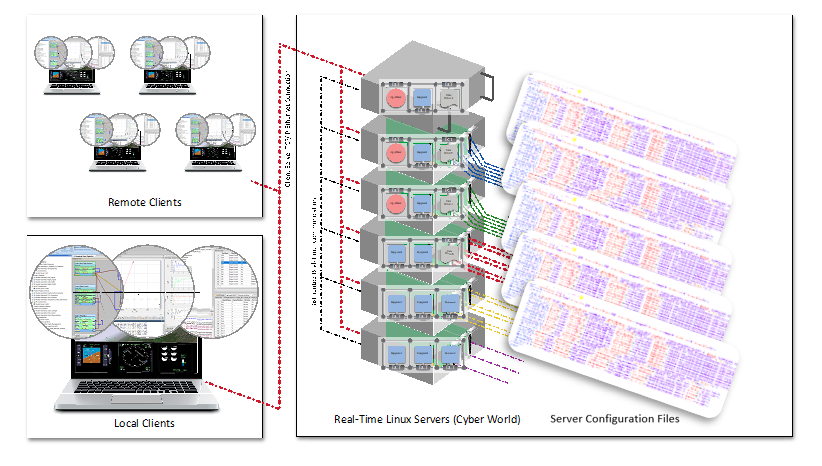 Given the scalable nature of industrial IoT Linux servers, it is not uncommon for a server’s hardware configuration to expand to include additional I/O, e.g. Ethernet channels, CAN channels, analog I/O, that can support new computing and data handling requirements.  In a distributed computing environment, entirely new servers may be added to the system network.  These servers may be accessed and utilized from any number of clients or users on the network.  Traditionally, server configuration files were kept on the clients, as they contain critical system information that is necessary to compile and build the real-time executables that run on the server.  However, in a dynamic operational environment, it became clear that having individual clients and users with copies of the server configuration file could easily create conflicts and mismatches as the server hardware gets modified.  A new, server-centric approach was required.

Server Discovery will query all possible server IP addresses based on the network subnet mask.  When a server is discovered, the server name will display as an available server, along with relevant information such as its current status, user attached (if in use), and the server architecture.  Users can then directly download the latest server configuration file from the server itself, or in the case of a hardware expansion, an updated master server configuration file can be uploaded directly to the server.  The Server Discovery feature eliminates any doubt that the local server configuration file is out of sync with the actual server hardware, eliminating potential failed simulation runs and unnecessary redundant project build operations, improving the overall efficiency and productivity of the ADEPT tools.